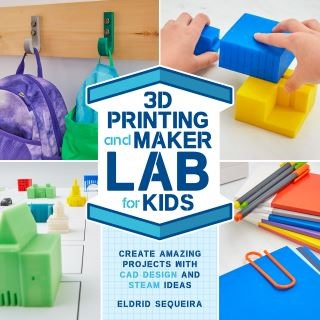 Create 25 amazing projects with 3D printing! With 3D Printing and Maker Lab for Kids, you can explore the creative potential behind this game-changing technology.The popular Lab for Kids series features a growing list of books that share hands-on activities and projects on a wide host of topics, including art, astronomy, clay, geology, math, and even how to create your own circus—all authored by established experts in their fields. Each lab contains a complete materials list, clear step-by-step photographs of the process, as well as finished samples. The labs can be used as singular projects or as part of a yearlong curriculum of experiential learning. The activities are open-ended, designed to be explored over and over, often with different results. Geared toward being taught or guided by adults, they are enriching for a range of ages and skill levels. Gain firsthand knowledge on your favorite topic with Lab for Kids.

Be a part of the future with 3D Printing and Maker Lab for Kids!

Eldrid Sequeira: Eldrid Sequeira is an educator and engineer who has spent almost 20 years in education, first as a teacher, then in education management. He is currently the Director of STEM (Science, Technology, Engineering, and Math) at Public Preparatory Network in New York City, leading the charter school network's high growth in academic proficiency. Previously, Sequeira held roles in managing math and technology-based education programs for more than 300 K–12 schools for the New York City Department of Education. He is also the founder of Dimension Learning, an award-winning nonprofit organization that has been providing afterschool STEM programming to students in grades 2–12 in New York City for five years. A frequent speaker on STEM education and careers, Sequeira has made appearances at the New York City Mathematics Project Annual Educators Conference, ChickTech NYC ACT-W Conference, and World Maker Faire New York. He is the creative driving force behind the curriculum at Dimension Learning and numerous other STEM programs through the NYC Department of Education and with Public Prep. He lives in New York City.