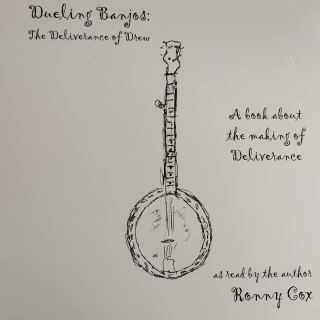 Dueling Banjos: The Deliverance of Drew is a collection of stories of the making of the iconic movie Deliverance, told from the perspective of one of the four main actors in the film, Ronny Cox, who played the character of Drew. Based on the novel by James Dickey, the movie was filmed in the summer of 1971 and was released the following year in 1972. Forty years later, it remains one of the most recognized films in movie history for being raw, emotional, violent and shocking - yet it leaves a lasting impression of artistic excellence. Ronny has since gone on to appear in over one hundred and forty-five movie and television productions, and has had a very successful career as a folk musician, playing in venues all over the country. He also happens to be one of the world's great storytellers. Ronny Cox is often ironically identified with the villains he has played in movies like Total Recall, Robocop and the ruthless politician in the hit science fiction TV series Stargate.

Dueling Banjos: The Deliverance of Drew includes great anecdotes about his fellow actors: Burt Reynolds, Jon Voight and Ned Beatty. Ronny Cox tells the real stories behind the filming of one of the most iconic movies of all time