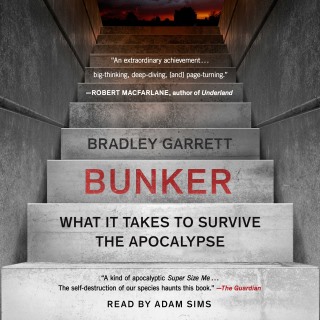 Building for the End Times

A thought-provoking, chilling, and eerily prescient look at “prepper” communities around the world that are building bunkers against a possible apocalypse.

Currently, 3.7 million Americans call themselves preppers. Millions more prep without knowing it. Bradley Garrett, who began writing this book years before the 2020 Covid-19 pandemic, argues that prepping is a rational response to global, social, and political systems that are failing to produce credible narratives of continued stability. Left with a sense of foreboding fueled by disease outbreaks, increasing government dysfunctionality, eroding critical infrastructure, nuclear brinksmanship, and an accelerating climate crisis, people all over the world are responding predictably—by hunkering down.

For this book, Garrett traveled across four continents to meet those who are constructing panic rooms, building underground backyard survival chambers, stockpiling supplies, preparing go bags, hiding inflatable rafts, rigging mobile “bugout” vehicles, and burrowing deep into the earth. He has returned with a brilliant, original and never less than deeply disturbing story from the frontlines of the way we live now: an illuminating reflection on our age of disquiet and dread that brings our times into new and sharper focus.

The “bunker,” Garrett shows, is all around us: in malls, airports, gated communities, the vehicles we drive. Most of all, he reveals, it’s in our minds.

Bradley Garrett: Bradley Garrett is an American-born social and cultural geographer and expert on exploration, urban politics, and subterranean space. He holds a PhD from the University of London and has published over fifty academic journal articles and book chapters. His work, which often has him entering lost, forgotten, or off-limits places, has been featured on the History Channel and in The Atlantic and GQ. He has previously authored several critically acclaimed books on urban exploration.