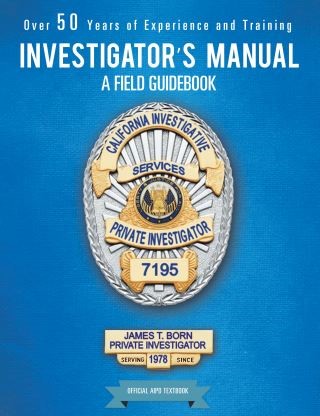 The world of law and investigations are truly a wonderous marriage. The author felt that over fifty years ago, as he walked up the steps of the Los Angeles Police Academy, when he first entered into a career in law enforcement. Jim, as he prefers to be called, enjoyed this new world and endeavored to learn everything he could about it. During his career, Jim attended 88 investigative training programs and completed 38 law enforcement related correspondence courses. In his spare time, he managed to obtain his Associates in Arts Degree in Police Science and his Bachelors of Science Degree in Criminal Justice Administration. Today, he is a District Court Certified Forensic and Fingerprint Expert; and has held a California State Private Investigators License for over 40 years. Jim has taught Crime Scene Technology to law enforcement officers throughout the United States. In his giveback to those who want to enter into the field of law enforcement, or private investigation, he wrote his Manual. Come with him into this new world, and give back to your community through knowledge and practice of what you learn within the covers of this book. Mark 5:09 “Blessed are the peace-makers: for they shall be called the children of God.” KJV

James T. Born: As the author of this text book, I bring with it over fifty years of proud and faithful law enforcement and private investigative experience. I hold an Associate in Arts Degree in Police Science and a Bachelor of Science Degree in CriminalJustice Administration. I have completed 85 related law enforcement schools and have completed 28 correspondence courses. I have over ten years in law enforcement, having held the highest rank of Sheriff's Captain (Chief Deputy Coroner and Chief of Detective Bureau), and have been licensed as a Private Investigator for over forty years. My records of service are unblemished and I have more times than none, graduated at the top of my classes. I have served eleven years in the U.S.Navy (Active duty and reserve combined), recipient of twenty­ three service medals to include the Meritorious Service Medal and the Bronze Star Medal for valor. I served twelve years in the U.S. Army reserve, retiring as at pay grade E-8 (Master Sergeant). I later was appointed by the Governor of the State of Nevada ,to the Nevada National Guard Reserves as a Captain. I was then later promoted by the National Guard, to the rank of Major. During this period, I was the Assistant Chief Provost Marshal and Military Police Training Officer for the State of Nevada. My military career has traveled from serving with Navy Special Warfare in the Mekong Delta, Vietnam to serving as an advisor to President Ronald Reagans Rapid Deployment Force (RDF-A) to becoming the Senior Military Police Instructor at the Camp Parks Military Police School in California. I have authored five books, a complete 350hour Security Training Program and a complete 600 hour Police Academy. In my spare time, I was for eleven years, a lie Detection Examiner and for several years I taught Crime Scene Technology for SEARCHIE Fingerprint laboratories. As an TRAC investigator I reinvestigated numerous homicides for defense attorney's as well as the Public Defenders Office.