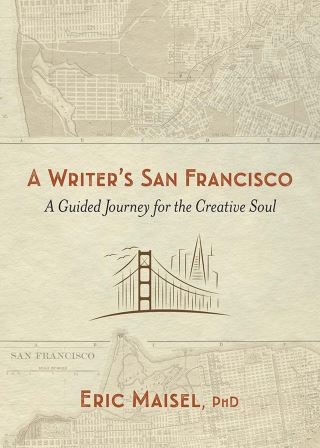 A Guided Journey for the Creative Soul

"Maisel has a wonderful voice and A Writer's San Francisco reads like a gritty, fluent love letter. He moves seamlessly between thoughtful descriptions of modern San Francisco and the San Francisco of the '60s and '70s in narratives that bring the city alive on the page. His affection and respect for the city are inspiring to all writers and artists, but also to anyone who has ever spent time in San Francisco and fallen in love with her." — Chris DeLorenzo, Laguna Writers Workshop

San Francisco holds a special place in the history of American literature and in the hearts of creative people everywhere. In thirty-one essays, Eric Maisel takes you on an enchanted journey through one of the world's greatest cities. Walk San Francisco's twisting streets, climb its famous hills, explore bohemian landmarks like City Lights Bookstore, and check out lesser-known neighborhoods. Along the way, Maisel conjures the city's past and present writers, including Twain, Ferlinghetti, and Kerouac, and tells personal stories from his own years as a Bay Area writer, teacher, and creativity coach. Whether you're a San Francisco native, a visitor, an armchair traveler, or an artistic soul seeking inspiration, you'll find lots to inspire you in these pages.

Eric Maisel:
Eric Maisel, PhD, is the author of more than 50 books, including Dover's A Writer's Paris, The Magic of Sleep Thinking, and Ten Zen Seconds. Dr. Maisel is a creativity coach and mental health advocate in the areas of critical psychology and critical psychiatry. He lectures around the world and facilitates deep writing workshops at the Esalen Institute, the Omega Institute, and the Kripalu Yoga Center.