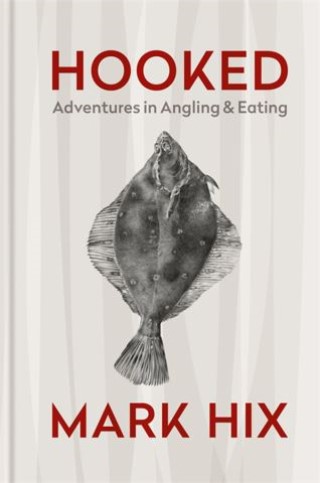 Adventures in Angling and Eating

Hooked delves into the exciting fishing adventures of celebrated chef, restaurateur and food writer Mark Hix, opening with the story of his first catch, age 8, being cooked for supper by his grandmother - the catalyst for what has become his passion.

You will be regaled with tales of extraordinary fishing expeditions at home and afar, from the banks of the Dumfriesshire coast to Tuscany's Porto Ercole, with each trip ending with a feast - be it the catch of the day (if all went to plan), or something found and foraged if the need arises (always have a back-up plan). Hooked features both exotic and humble dishes such as Hot stone salmon, Barracuda & pineapple ceviche, Trout kedgeree and Mahi mahi sashimi.

Weaved into the narrative are the infectious, and unexpected, joys of fishing and what it does for you. Hint: it's not necessarily about the fish.

Celebrated chef, restaurateur and food writer Mark Hix is known for his original take on British gastronomy. After 17 years as Chef Director at Caprice Holdings, he opened his first restaurant in 2008 - the distinguished HIX Oyster & Chop House in Farringdon. Following the success of Chop House Mark opened HIX Mayfair, HIX Soho and his chicken and steak concept restaurants Tramshed in Shoreditch and Hixter Bankside. In autumn of 2015 Mark opened his first stand-alone bar in The Old Vic theatre, offering a late-night venue in Waterloo. Mark and collaborator Damien Hirst opened Pharmacy 2 in Vauxhall in 2016.

Outside of London, in Mark's native Dorset, is HIX Oyster & Fish House and HIX Townhouse, a boutique hotel, both in Lyme Regis. Mark is frequently lauded as one of London's most eminent restaurateurs with an unrivalled knowledge of ingredients with provenance. Mark has a weekly column in City AM, a monthly column in GQ and is the author of a number of cookbooks on British cuisine.

Mark hosts an annual food festival in Lyme Regis, Food Rocks, to showcase the best producers and suppliers in Dorset and surrounding areas.