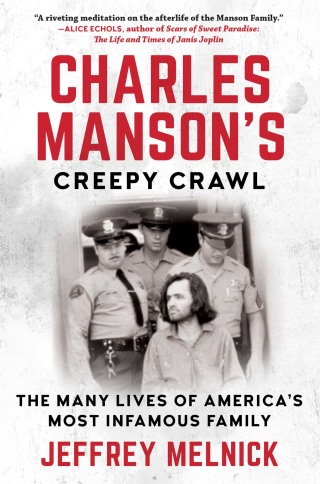 The Many Lives of America's Most Infamous Family

With a new epilogue updated from its hardcover edition titled Creepy Crawling: Charles Manson and the Many Lives of America's Most Infamous Family

"Creepy crawling" was the Manson Family's practice of secretly entering someone's home, and without harming anyone, leaving only a trace of evidence that they had been there, some reminder that the sanctity of the private home had been breached. Now, author Jeffrey Melnick reveals just how much the Family creepy crawled their way through Los Angeles in the sixties and then on through American social, political, and cultural life for fifty years, firmly lodging themselves in our minds. Even now, it is almost impossible to discuss the sixties, teenage runaways, sexuality, drugs, music, California, or even the concept of family without referencing Manson and his "girls."

Not just another Charles Manson history, Charles Manson's Creepy Crawl: The Many Lives of America's Most Infamous Family explores how the Family weren't so much outsiders as emblematic of the Los Angeles counterculture freak scene, and how Manson worked to connect himself to the mainstream of the time. Ever since they spent two nights killing seven residents of Los Angeles—what we now know as the "Tate-LaBianca murders"—the Manson family has rarely slipped from the American radar for long. From Emma Cline's The Girls to the TV show Aquarius, as well as two major films in 2019, including Quentin Tarantino's Once Upon a Time in Hollywood, the family continues to find an audience. What is it about Charles Manson and his family that captivates us still? Author Jeffrey Melnick sets out to answer this question in this fascinating and compulsively readable cultural history of the Family and their influence from 1969 to the present.

Jeffrey Melnick: Jeff Melnick has been teaching and writing about American cultural history for some 25 years. His books on Black-Jewish relations, 9/11, immigration, and popular culture have been widely reviewed and cited often in academic journals and mainstream journalism. His first book, A Right to Sing the Blues: African Americans, Jews, and American Popular Song was given a Booklist Editor's Choice Award for 1999 and his most recent book, 9/11 Culture: American Under Construction was translated into Arabic soon after its initial publication. Melnick currently serves as Graduate Program Director for American Studies at University of Massachusetts Boston.