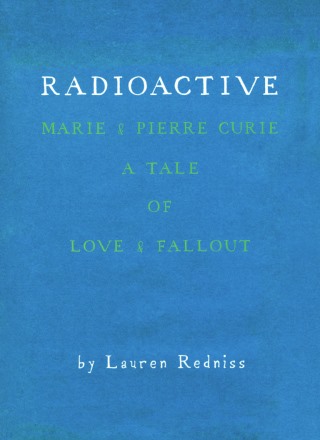 Marie & Pierre Curie: A Tale of Love and Fallout

“Radioactive is quite unlike any book I have ever read—part history, part love story, part art work and all parts sheer imaginative genius.”
— Malcolm Gladwell

Radioactive is the mesmerizing, landmark biography of Marie Curie, by acclaimed author and artist Lauren Redniss. Through brilliant storytelling, Redniss walks us through Curie’s life, which was marked by extraordinary scientific discovery and dramatic personal trauma—from her complex working and romantic relationship with Pierre Curie, to their discovery of two new scientific elements, to Pierre’s tragic death, to Marie’s two Nobel Prizes. A haunting and wondrous portrait of one of history's most intriguing figures, Radioactive is a stunning biography and a true work of art. Whether young or old, scientific novice or expert, no one will fail to be moved by Lauren Redniss’s eerie and wondrous evocation of one of history’s most intriguing figures.

Lauren Redniss is the author of Century Girl: 100 years in the Life of Doris Eaton Travis, Last Living Star of the Ziegfeld Follies and Radioactive: Marie & Pierre Curie, A Tale of Love and Fallout, a finalist for the 2011 National Book Award for non fiction. Her writing and drawing has appeared in numerous publications including the New York Times, which nominated her work for the Pulitzer Prize. She was a fellow at the Cullman Center for Scholars & Writers at the New York Public Library in 2008-2009 and became a New York Institute for the Humanities fellow in 2010. Beginning in 2012, she will be artist-in-residence at the American Museum of Natural History. She teaches at Parsons the New School for Design in New York City.