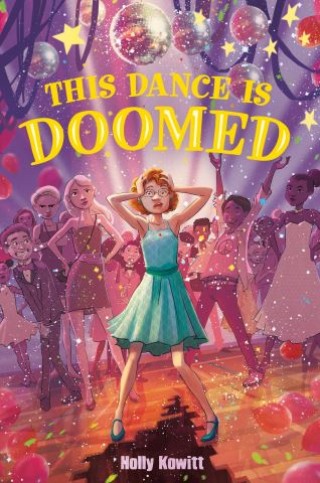 This Dance Is Doomed

This Dance Is Doomed, Holly Kowitt's sequel to The Principal's Underwear is Missing, the second in her middle-grade illustrated series, explores friendship and the high cost of Prom-Mania--with hilarious results!

Can a 6th grade nobody solve a diva's dating problems?

Selfie St. Clair is the most popular, glamorous 8th grader the school has ever seen. Everyone's sure she'll go to Prom with a teen TV star, or even a minor prince.

But Selfie has a terrible secret: no-one has asked her. Too embarrassed to tell her "cool" friends, she turns to the most unlikely dating coach ever: 6th grader Becca, who's never had a date in her life.

But some people think Prom fever is out of control. In fact, Becca's closest pals are planning an anti-Prom! Now she's torn between her besties and her new superstar friend.

Not to mention, an impossible crush of her own...

Holly Kowitt: Holly Kowitt has written more than fifty books for younger readers, including the Loser List series, The Principal's Underwear is Missing, and This Dance is Doomed. She lives in New York City, where she enjoys cycling, flea markets, and West Coast swing dancing.