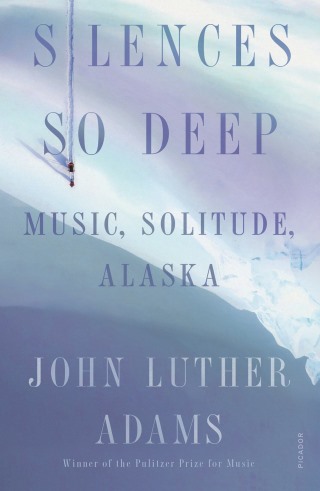 In the summer of 1975, the composer John Luther Adams, then a twenty-two-year-old graduate of CalArts, boarded a flight to Alaska. So began a journey into the mountains, forests, and tundra of the far north—and across distinctive mental and aural terrain—that would last for the next forty years.

Silences So Deep is Adams’s account of these formative decades—and of what it’s like to live alone in the frozen woods, composing music by day and spending one’s evenings with a raucous crew of poets, philosophers, and fishermen. From adolescent loves—Edgard Varèse and Frank Zappa—to mature preoccupations with the natural world that inform such works as The Wind in High Places, Adams details the influences that have allowed him to emerge as one of the most celebrated and recognizable composers of our time. Silences So Deep is also a memoir of solitude enriched by friendships with the likes of the conductor Gordon Wright and the poet John Haines, both of whom had a singular impact on Adams’s life. Whether describing the travails of environmental activism in the midst of an oil boom or midwinter conversations in a communal sauna, Adams writes with a voice both playful and meditative, one that evokes the particular beauty of the Alaskan landscape and the people who call it home.

Ultimately, this book is also the story of Adams’s difficult decision to leave a rapidly warming Alaska and to strike out for new topographies and sources of inspiration. In its attentiveness to the challenges of life in the wilderness, to the demands of making art in an age of climate crisis, and to the pleasures of intellectual fellowship, Silences So Deep is a singularly rich account of a creative life.

John Luther Adams: John Luther Adams was born in Meridian, Mississippi, and attended the California Institute of the Arts before moving to Alaska in 1978, where he lived until 2014. He was awarded the Pulitzer Prize for Music and a Grammy Award for his orchestral composition Become Ocean, which was premiered by the Seattle Symphony Orchestra in 2013. He is also the author of Winter Music: Composing the North and The Place Where You Go to Listen: In Search of an Ecology of Music. Since leaving Alaska, Adams has lived in New York City and in the deserts of Chile, Mexico, and the Southwestern United States.