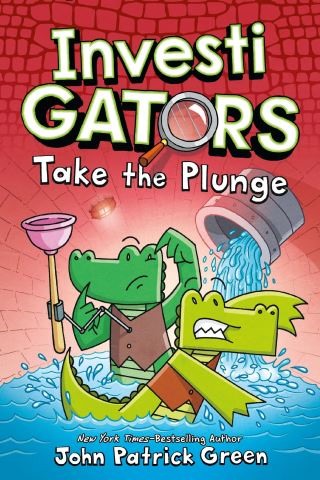 S.U.I.T. headquarters is under attack, and Mango and Brash are going undercover and underground disguised as city sewer workers to unclog a sticky situation. But when their search for the criminal Crackerdile backfires, the toilets they travel through back up—and the InvestiGators take the blame for it!

Can Mango and Brash restore their good name and put the real culprit behind bars before the whole city is in deep water?

John Patrick Green: John Patrick Green is a human with the human job of making books about animals with human jobs, such as Hippopotamister, Kitten Construction Company, and InvestiGators. John is definitely not just a bunch of animals wearing a human suit pretending to have a human job. He is also the artist and co-creator of the graphic novel series Teen Boat!, with writer Dave Roman. John lives in Brooklyn in an apartment that doesn't allow animals other than the ones living in his head.