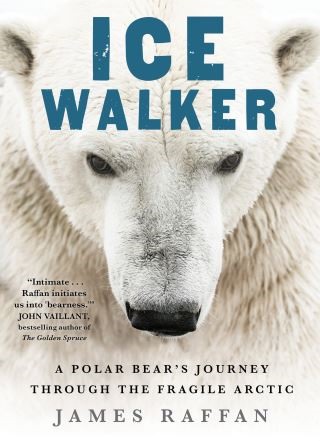 A Polar Bear's Journey through the Fragile Arctic

From bestselling author James Raffan comes an enlightening and original story about a polar bear’s precarious existence in the changing Arctic, reminiscent of John Vaillant’s The Golden Spruce.

Nanurjuk, “the bear-spirited one,” is hunting for seals on Hudson Bay, where ice never lasts more than one season. For her and her young, everything is in flux.

From the top of the world, Hudson Bay looks like an enormous paw print on the torso of the continent, and through a vast network of lakes and rivers, this bay connects to oceans across the globe. Here, at the heart of everything, walks Nanurjuk, or Nanu, one polar bear among the six thousand that traverse the 1.23 million square kilometers of ice and snow covering the bay.

For millennia, Nanu’s ancestors have roamed this great expanse, living, evolving, and surviving alongside human beings in one of the most challenging and unforgiving habitats on earth. But that world is changing. In the Arctic’s lands and waters, oil has been extracted—and spilled. As global temperatures have risen, the sea ice that Nanu and her young need to hunt seal and fish has melted, forcing them to wait on land where the delicate balance between them and their two-legged neighbors has now shifted.

This is the icescape that author and geographer James Raffan invites us to inhabit in Ice Walker. In precise and provocative prose, he brings readers inside Nanu’s world as she treks uncertainly around the heart of Hudson Bay, searching for nourishment for the children that grow inside her. She stops at nothing to protect her cubs from the dangers she can see—other bears, wolves, whales, human beings—and those she cannot.

By focusing his lens on this bear family, Raffan closes the gap between humans and bears, showing us how, like the water of the Hudson Bay, our existence—and our future—is tied to Nanu’s. He asks us to consider what might be done about this fragile world before it is gone for good. Masterful, vivid, and haunting, Ice Walker is an utterly unique piece of creative nonfiction and a deeply affecting call to action.

James Raffan: James Raffan is a prolific writer, speaker, and geographer, and the author of numerous books, including the bestselling Circling the Midnight Sun; Emperor of the North; Bark, Skin and Cedar; and Fire in the Bones. He has written for a variety of media outlets, including National Geographic, Canadian Geographic, Up Here, Explore and The Globe and Mail, and produced radio and television documentaries for CBC Radio and the Discovery Channel. His work has taken him all over the world. He is an international fellow of the Explorers Club, a past chair of the Arctic Institute of North America, and a fellow and past governor of the Royal Canadian Geographical Society, service for which he was awarded many medals, including the Queen’s Diamond Jubilee Medal. From 2010 to 2013, he traveled through the Arctic Circle, spending time in Iceland, Norway, Sweden, Finland, Russia, Alaska, Canada, and Greenland, as he researched and wrote on culture and climate change in the North. He lives in Seeley’s Bay, Ontario. Visit him at JamesRaffan.ca or follow him on Twitter @raffjam.