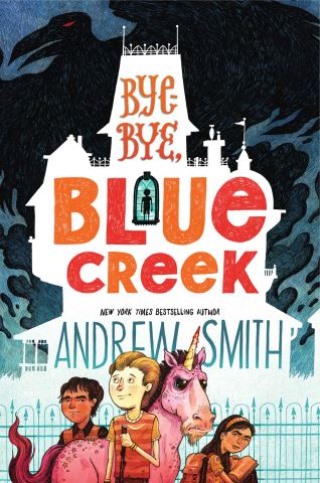 Sam Abernathy prepares to leave home for the first time in this charming follow-up to award-winning author Andrew Smith’s The Size of Truth.

Vampires have just moved in to the haunted house next door.

All twelve-year-old Sam Abernathy wanted to do was make the most of his last few weeks in Blue Creek before he has to say goodbye. Goodbye to the well he fell in eight years ago; goodbye to cooking at Lily Putt’s snack bar; goodbye to his overdramatic best friend, Karim; goodbye to unsweetened iced tea at Colonel Jenkins’s Diner every Saturday with Bahar (who he does not have a crush on); goodbye to his old life.

But the arrival of the Monster People throws a wrench into his plans. Things only get worse when the new family hires Bahar to babysit their child, Boris, who is almost certainly a cannibal. And then—scariest of all—they employ Sam’s catering services. He can’t possibly say no.

If he doesn’t survive the summer, Sam might not have to say bye-bye to Blue Creek at all.

Andrew Smith: Andrew Smith is the author of several novels for young adults, including Winger, Stand-Off, 100 Sideways Miles, and the Michael L. Printz Honor Book Grasshopper Jungle. He lives in a remote area in the mountains of Southern California with his family, two horses, two dogs, and three cats. He doesn’t watch television, and occupies himself by writing, bumping into things outdoors, and taking ten-mile runs on snowy trails. Visit him online at AuthorAndrewSmith.com.