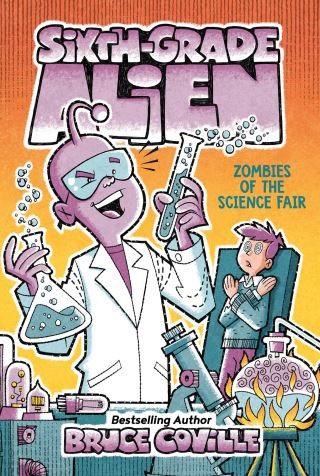 Zombies of the Science Fair

Pleskit and Tim’s last-minute project for the science fair leads to disaster in this fifth book in the hilarious, fast-paced, and accessible sci-fi series Sixth-Grade Alien from the bestselling author of Aliens Ate My Homework, Bruce Coville.

It’s science fair time again, and Tim Tomkins is in trouble. It’s only two days until the big event, and he hasn’t finished his project! In fact, he hasn’t even started it.

Given Tim’s track record with homework, this is no big surprise. But this year Tim has a new resource—his alien best friend, Pleskit Meenom! Surely with his super science Pleskit can help Tim come up with a knockout project for the science fair.

Pleskit makes his own science project out of helping Tim, but his solution turns out to have side effects that not even an alien could have expected! Soon Pleskit is left desperately trying to answer the question, “What do you do when you’ve just amputated your best friend’s personality?”

Bruce Coville: Bruce Coville has published more than one hundred books, which have sold more than sixteen million copies. Among his most popular titles are My Teacher Is an Alien, Into the Land of the Unicorns, and The Monster’s Ring. Bruce also founded Full Cast Audio, a company that creates recordings of the best in children’s and young adult literature. He lives in Syracuse, New York, with his wife, Katherine. Visit him at BruceCoville.com.