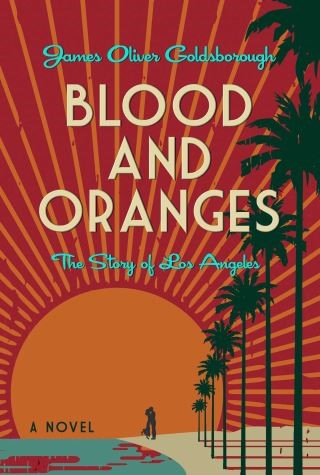 The Story of Los Angeles: A Novel

An action-packed historical novel whose charismatic characters take the reader from the roaring twenties to the fiery nineties in America's favorite left coast city. Los Angeles has never been better portrayed than by novelist James Oliver Goldsborough in Blood and Oranges.

Blood and Oranges: The Story of Los Angeles tells the story of how Los Angeles got that way— you know, THAT way, with Hollywood, mega-churches, impossible traffic, oil wells on the beaches, murders in the foothills, and riots in the suburbs. You have to go back a ways to understand, back to when the water came. Twin brothers Willie and Eddie Mull, a preacher and a high roller, arrive with the water and set out to make their marks. They rise with the city and reach the top.

The brothers have much to answer for, especially to their children. Maggie and Lizzie, Eddie’s daughters, don’t like Eddie’s mob ties, oil wells, or his gambling ship in Santa Monica Bay. Cal Mull, Willie’s son, watches his father rise to become the nation’s top evangelistic preacher, but like his idol, St. Augustine, Willie is weak in the flesh. Maggie, an aviator, wants women to fly in the war, but must get past Howard Hughes and find help in Washington. Lizzie works for the LA Times, wants women to be able to write for more than just the society pages in the paper, and does her best to get crime out of the D.A.’s department.

(And what happened to the trolleys that once covered 1,100 miles of city streets, half the distance to Chicago?)

The second generation of the family reacts to the first, but then must face the revolt of its own children.

In Blood and Oranges, we follow and fall in love with the City of Angels as it transforms itself over three generations, rolling with the waves that lap its Pacific shores, a place of plazas and orange groves becoming something unrecognizable to those who knew it even a half century earlier. It is the story of a family with its fingers in the seminal events of a city’s history—the rise and fall of institutions, neighborhoods, citizens, of the very land itself, constantly threatened by the people who call themselves its stewards.

James O. Goldsborough: James O. Goldsborough, raised in Los Angeles, is an award-winning writer with a 40-year career in journalism. Goldsborough spent 15 years in Europe as a foreign correspondent for the New York Herald Tribune, International Herald Tribune, Newsweek Magazine and the Toronto Star. He has written numerous articles for the New York Times Magazine, Foreign Affairs and Foreign Policy. His first book, “Rebel Europe,” published by Macmillan, was hailed by the Los Angeles Times reviewer, “the most important book I have read in years.” He next published “The Misfortunes of Wealth,” a family memoir dealing with the disadvantages of inherited money. His two earlier well-received historical novels are "The Paris Herald" (2014) and "Waiting for Uncle John" (2018), both published by Prospecta Press.