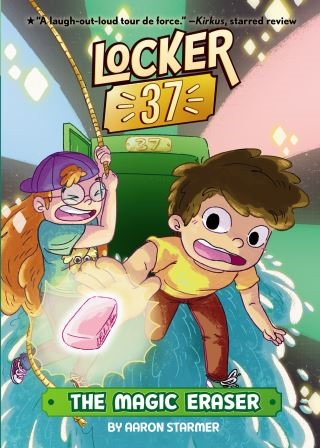 Ever wish you had a way to magically solve all of your problems? The kids at Hopewell Elementary School might have exactly what you're searching for--just walk down the hall and stop at Locker 37.

Carson Cooper realizes that he has a very inconveniently located stain on his pants. That is NOT the way to start things off on the first day of school. Fortunately, Carson finds a letter written by last year's fourth graders stuck to the bottom of his desk with some watermelon bubble gum. The note explains the existence of Locker 37, which will provide a solution to any problem! And when Carson sneaks off to the locker it does, indeed, provide a solution--an eraser! But the problem is that the eraser works a little too well, erasing anything it's rubbed against three times. ANYTHING.

Aaron Starmer: Aaron Starmer was born in northern California and raised in the suburbs of Syracuse, New York. Before pursuing writing full-time, he worked in New York City for over ten years as an editor for a travel bookseller and as an operations director for an African safari company. His middle grade and young adult novels have been translated into multiple languages and have appeared on best of the year lists from Time magazine, the Wall Street Journal, New York Public Library, YALSA, Bank Street College of Education, Chicago Public Library, and School Library Journal. His latest novel, Spontaneous, is in development as a film. He lives in Vermont with his wife and two daughters.