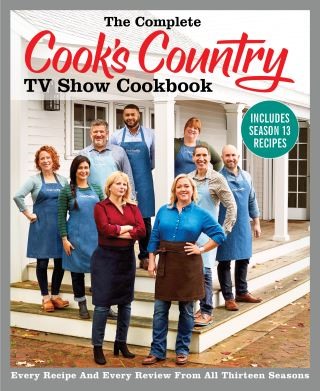 Every Recipe and Every Review from All Thirteen Seasons

Hit the road with top-rated Cook's Country TV and devour another year of great American recipes.

Discover new recipes from across the U.S. and cook them along with the cast of the hit TV show Cook's Country. The homegrown recipes cover both classic and regional favorites from small-town America to the big city. Season 13 recipe highlights include fresh takes on homey foods such as Cheesy Stuffed Shells, One-Batch Fried Chicken, and Pennsylvania Dutch Apple Pie as well as newly created recipes for Amish Cinnamon Bread, Eggplant Pecorino, and Greek Chicken. This cookbook has it all, from fluffy omelets, pancakes, biscuits, and muffins to plenty of desserts, cakes, cookies, pies, and more.

In addition to more than 475 foolproof recipes, there is information on the backstory and inspiration behind many of the dishes. A comprehensive shopping guide lists all of the winning products featured on the TV show including ketchup, strawberry jam, and vanilla ice cream.