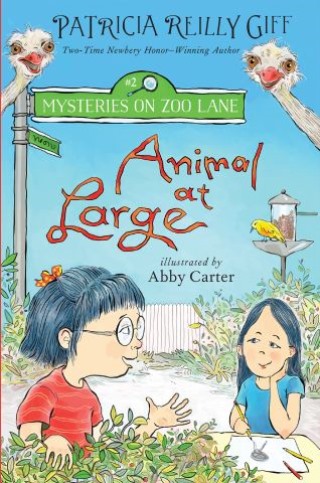 A missing animal at the zoo and strange noises coming from her backyard can mean only one thing for Tori: she's got a mystery to solve!

Tori loves living on Zoo Lane with her family. Who else gets to live at a zoo--and with her cousin Sumiko visiting from Tokyo soon, this is shaping up to be the best summer ever!

But when rumors of a missing animal start to spread, Tori wants to help . . . except she doesn't know which creature is on the loose. An ostrich? A little frog? There's also a strange noise coming from her backyard. It almost sounds like someone is calling her name! Tori is on the case.

In this second book in the illustrated Mysteries on Zoo Lane series, two-time Newbery Honor author Patricia Reilly Giff has crafted a charming story about conservation, animal care, friendship, and problem-solving. In touch with the programs and initiatives that today's zoos are undertaking, Giff provides readers with a fresh look at the work of zoologists. Charming line artwork by Abby Carter appears throughout and keeps the story upbeat.

Patricia Reilly Giff: Patricia Reilly Giff is the winner of two Newbery Honor Awards, for Lily's Crossing and Pictures of Hollis Woods. Some of her other middle grade novels include Genevieve's War, winner of the Christopher Award; Nory Ryan's Song, an ALA Notable Book; and A Slip of a Girl, which received two starred reviews. Her Kids of the Polk Street School series remain a popular chapter book mainstay. She spent twenty years teaching in New York City public schools.

Abby Carter has been illustrating since she was eleven years old when she started a card business with her grandma. Since then Carter has illustrated a number of books, including Ollie's School Day: A YES-and-NO Book, the Andy Shane books, and Daddies Do It Different.