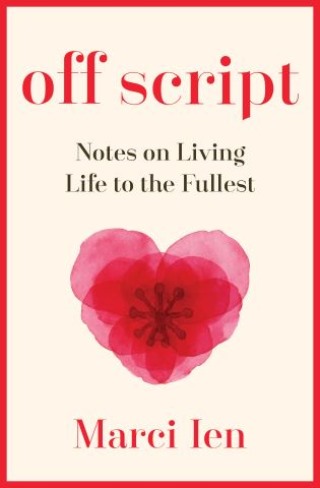 Finding Your Voice, Living Out Loud

For over a decade, millions of Canadians started their day with Marci Ien. As a Black female news anchor and, later, the first Black woman in Canada to co-host a national morning show, Marci felt the pressure to stay “on script”—with little room for error. She had to be great. She had to show, every day, that she deserved to be there.

When her career veered sharply away from the news, Marci embraced her new role “off script.” With a greater opportunity to speak her mind on the air, Marci now bravely shares experiences from her own life with viewers and pursues more ways to make a difference in her community.

In Off Script, Marci shares personal milestones, tales of resilience and kindness, dramatic moments from her career as a journalist and insights from the many unforgettable people that she’s met and interviewed. Living off script means having the courage to speak up, trust your voice and follow your own formula for what matters most.

MARCI IEN is a co-host of The Social and was the news anchor of Canada AM for fifteen years. Her career in television spans over three decades, and has taken her from Halifax, where she joined CTV National News as a reporter in 1997; to Vancouver, where she was news anchor for CTV’s Olympic Morning at the 2010 Winter Olympic Games. In 2016, she was nominated for a Canadian Screen Award in the category of Best Talk Show Host for her work on Canada AM. A sought-after speaker and moderator, Marci Ien also works with Journalists for Human Rights and World Vision, and was honoured by the Black Business and Professional Association with a Harry Jerome Award. She lives in Toronto.