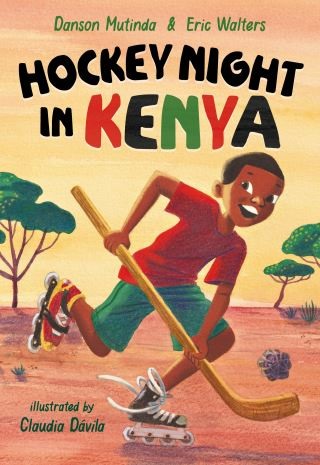 ★ “This simple story of discovery, sport, and friendship is filled with likable characters and innocently joyful moments...Delightful.”—Kirkus Reviews, starred review

Kenyan orphans, Kitoo and Nigosi, spend their days studying, playing soccer, helping their elders with chores around the orphanage and reading from the limited selection of books in their library. When the librarian gives Kitoo a copy of Sports Around the World he becomes fascinated by an image of the Canadian national men's ice hockey team. Then one day the fates align and Kitoo finds a pair of beat up old roller blades, he teaches himself to skate and dreams of one day playing hockey like the men in his book. But you can’t play ice hockey in Kenya, can you?

Danson Mutinda’s parents, Ruth and Henry Kyatha, co-founded the Hope Development Centre orphanage with Eric and Anita Walters in 2007. When Henry passed away, Dansen became patron of the program. He and his co-author, Eric Walters, worked together to write this story of two energetic and joyful children who are based on many of the children they work with at the centre. Danson lives in Kikima, Kenya, on the grounds of the orphanage.

Eric Walters began writing as a way to get his fifth-grade students interested in reading and writing. A Member of the Order of Canada, he has now published more than 100 novels and picture books. He is a tireless presenter, speaking to over 100,000 students per year in schools across the country. He lives in Guelph, Ontario.