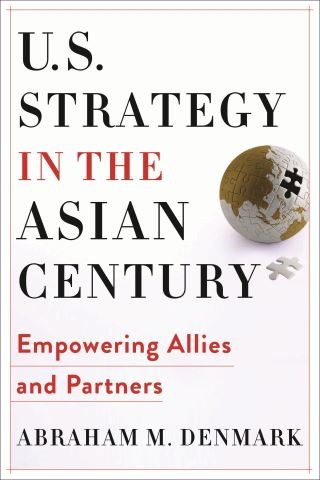 U.S. Strategy in the Asian Century

As the Indo-Pacific emerges as the world’s most strategically consequential region and competition with China intensifies, the United States must adapt its approach if it seeks to preserve its power and sustain regional stability and prosperity. Yet as China grows more powerful and aggressive and the United States appears increasingly unreliable, the Indo-Pacific has become riven with uncertainty. These dynamics threaten to undermine the region’s unprecedented peace and prosperity.

U.S. Strategy in the Asian Century offers vital perspective on the future of power dynamics in the Indo-Pacific, focusing on the critical roles that American allies and partners can play. Abraham M. Denmark argues that these alliances and partnerships represent indispensable strategic assets for the United States. They will be necessary in any effort by Washington to compete with China, promote prosperity, and preserve a liberal order in the Indo-Pacific. Blending academic rigor and practical policy experience, Denmark analyzes the future of major-power competition in the region, with an eye toward American security interests. He details a pragmatic approach for the United States to harness the power of its allies and partners to ensure long-term regional stability and successfully navigate the complexities of the new era.

Abraham M. Denmark: Abraham M. Denmark is director of the Asia Program and a senior fellow at the Kissinger Institute on China and the United States at the Woodrow Wilson International Center for Scholars and an adjunct associate professor in the Security Studies Program of the Edmund A. Walsh School of Foreign Service at Georgetown University. He served as deputy assistant secretary of defense for East Asia. In January 2017, he received the Secretary of Defense Medal for Outstanding Public Service. He also received the Order of the Resplendent Banner from the Republic of China (Taiwan), was made an honorary admiral in the Navy of the Republic of Korea, and was named a Twenty-First-Century Leader by the National Committee on American Foreign Policy.