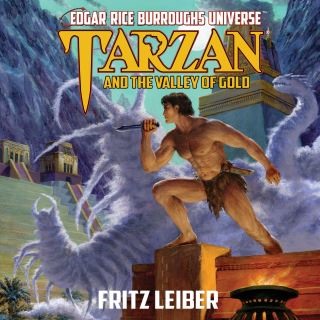 Tarzan and the Valley of Gold (Edgar Rice Burroughs Universe)

The burning wreck of a passenger jet with a missing cargo of gold and a desperate plea from a friend lead Tarzan of the Apes deep into intrigue in the jungles of Brazil. Soon the ape-man finds himself facing his most deadly nemesis yet: a criminal mastermind named Vinaro, whose enemies perish in mysterious explosions of gold and flame. But that may be only the beginning of Tarzan's challenges. For if he is to defeat Vinaro, Tarzan must confront him in the legendary golden city of Tucumai, from where no outsider has ever returned.

Fritz Lieber: A renowned and award-winning author of science fiction, fantasy, and horror, Fritz Leiber (1910-1992) is best known for his Fafhrd and the Gray Mouser fantasy series. He is credited with coining the term sword and sorcery and is widely considered one of the genre's founders. A SFWA Grand Master and winner of six Hugo Awards, three Nebula Awards, and two World Fantasy Awards, Leiber stands as a giant in the field of fantastic literature.