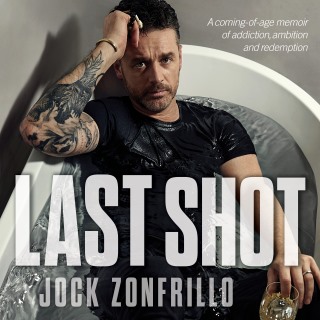 Selected as one of Audible’s best audiobooks of 2021.

A coming-of-age memoir of addiction, ambition and redemption in the high-stakes world of Michelin star kitchens.

Jock’s life spiralled out of control when he tried heroin for the first time as a teenager while growing up in 1980s Glasgow. For years he balanced a career as a rising star amongst legendary chefs with a crippling drug addiction that took him down many dark paths.

Fired from his job at a Michelin star restaurant in Chester, England, after a foul-mouthed rant, Jock made his way to London looking for work and found himself in front of the legendary Marco Pierre White. He credits White for saving his life, but Jock continued to struggle with addiction in a world of excess, celebrity, and cut-throat ambition.

On New Year’s Eve 1999, Jock shot up his last shot of heroin before boarding a plane to Sydney, where he would find passion and new meaning in life in the most unexpected places. There would be more struggles ahead, including two failed marriages, the closure of his prized restaurant during COVID-19, his time on-country, and some very public battles.

This is his unforgettable story.

Praise for Last Shot
"Last Shot is Trainspotting meets Kitchen Confidential. Jock’s ability to not sugarcoat the truth and his brutal honesty about his struggle with his inner demons will resonate with so many people. That coupled with his absolute passion for food, his commitment to highlighting the culture and food of Australia’s First Nations People and his pure love for his family makes this a truly stunning book. I loved it.” Actress, Rebecca Gibney

“Oh my goodness what a book. I’ve just finished it, devoured it in under four hours. I laughed and cried and marvelled at him.”  News Corp's National Entertainment Writer, Lisa Woolford

Jock Zonfrillo:
Born in Glasgow to an Italian father and Scottish mother, Jock Zonfrillo’s formative years were heavily influenced by his respective cultures.

Attracted to the dynamic and competitive kitchens of London, he worked alongside top chefs like Marco Pierre White, Gordon Ramsay and David Cavalier.

Jock was on a year-long sabbatical in Sydney when a conversation with an Aboriginal man became the turning point in Jock’s journey to discover the taste and origins of Australia’s Indigenous cuisine.

Jock eventually moved to Adelaide and opened Restaurant Orana in 2013. Orana was a fine-dining experience designed to acknowledge Indigenous culture through food.

Jock hosted Nomad Chef on The Discovery Channel, a show which led an exploration into the Indigenous cultures and cuisine of some of the most remote communities on earth. He appeared in the MasterChef Australia kitchen as a guest chef across three seasons and in late 2019 Jock was announced as one of the new MasterChef Australia judges alongside Andy Allen and Melissa Leong.

The father of four is happily married to businesswoman Lauren Zonfrillo. The couple live together in Melbourne with their two young children, Alfie and Isla.