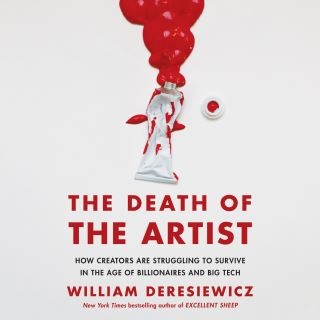 The Death of the Artist

A deeply researched warning about how the digital economy threatens artists' lives and work—the music, writing, and visual art that sustain our souls and societies—from an award-winning essayist and critic

There are two stories you hear about earning a living as an artist in the digital age. One comes from Silicon Valley. There's never been a better time to be an artist, it goes. If you've got a laptop, you've got a recording studio. If you've got an iPhone, you've got a movie camera. And if production is cheap, distribution is free: it's called the Internet. Everyone's an artist; just tap your creativity and put your stuff out there.

The other comes from artists themselves. Sure, it goes, you can put your stuff out there, but who's going to pay you for it? Everyone is not an artist. Making art takes years of dedication, and that requires a means of support. If things don't change, a lot of art will cease to be sustainable.

So which account is true? Since people are still making a living as artists today, how are they managing to do it? William Deresiewicz, a leading critic of the arts and of contemporary culture, set out to answer those questions. Based on interviews with artists of all kinds, The Death of the Artist argues that we are in the midst of an epochal transformation. If artists were artisans in the Renaissance, bohemians in the nineteenth century, and professionals in the twentieth, a new paradigm is emerging in the digital age, one that is changing our fundamental ideas about the nature of art and the role of the artist in society.

A Macmillan Audio production from Henry Holt and Company

William Deresiewicz: William Deresiewicz is an award-winning essayist and critic, frequent speaker at colleges and other venues, and former professor of English at Yale. His writing has appeared in the Atlantic, the New York Times, Harper’s, The Nation, The New Republic, The American Scholar, and many other publications. He is the recipient of a National Book Critics Circle award for excellence in reviewing and the New York Times bestselling author of Excellent Sheep and A Jane Austen Education.