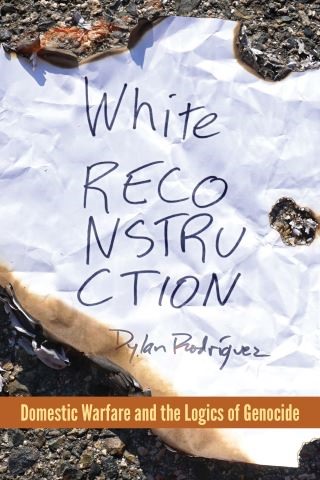 Domestic Warfare and the Logics of Genocide

We are in the fray of another signature moment in the long history of the United States as a project of anti Black and racial–colonial violence. Long before November 2016, white nationalism, white terrorism, and white fascist statecraft proliferated. Thinking across a variety of archival, testimonial, visual, and activist texts—from Freedmen’s Bureau documents and the “Join LAPD” hiring campaign to Barry Goldwater’s hidden tattoo and the Pelican Bay prison strike—Dylan Rodríguez counter-narrates the long “post–civil rights” half-century as a period of White Reconstruction, in which the struggle to reassemble the ascendancy of White Being permeates the political and institutional logics of diversity, inclusion, formal equality, and “multiculturalist white supremacy.”

Throughout White Reconstruction, Rodríguez considers how the creative, imaginative, speculative collective labor of abolitionist praxis can displace and potentially destroy the ascendancy of White Being and Civilization in order to create possibilities for insurgent thriving.

Dylan Rodríguez: Dylan Rodríguez, Professor in the Department of Media and Cultural Studies at the University of California, Riverside, served as Chair of Ethnic Studies from 2009 to 2016, and as President of the American Studies Association in 2020–2021. He is the author of Forced Passages: Imprisoned Radical Intellectuals and the U.S. Prison Regime and Suspended Apocalypse: White Supremacy, Genocide, and the Filipino Condition. He is a founding member of Critical Resistance and the Critical Ethnic Studies Association.