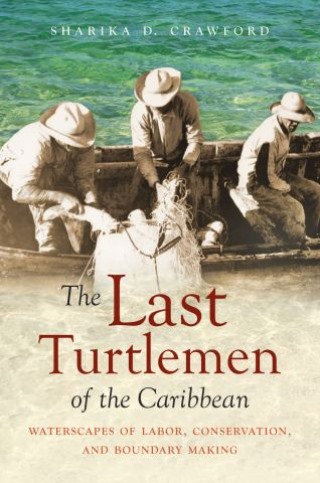 The Last Turtlemen of the Caribbean

Illuminating the entangled histories of the people and commodities that circulated across the Atlantic, Sharika D. Crawford assesses the Caribbean as a waterscape where imperial and national governments vied to control the profitability of the sea. Crawford places the green and hawksbill sea turtles and the Caymanian turtlemen who hunted them at the center of this waterscape. The story of the humble turtle and its hunter, she argues, came to play a significant role in shaping the maritime boundaries of the modern Caribbean.

Crawford describes the colonial Caribbean as an Atlantic commons where all could compete to control the region's diverse peoples, lands, and waters and exploit the region's raw materials. Focusing on the nineteenth and twentieth centuries, Crawford traces and connects the expansion and decline of turtle hunting to matters of race, labor, political and economic change, and the natural environment. Like the turtles they chased, the boundary-flouting laborers exposed the limits of states' sovereignty for a time but ultimately they lost their livelihoods, having played a significant role in legislation delimiting maritime boundaries. Still, former turtlemen have found their deep knowledge valued today in efforts to protect sea turtles and recover the region's ecological sustainability.