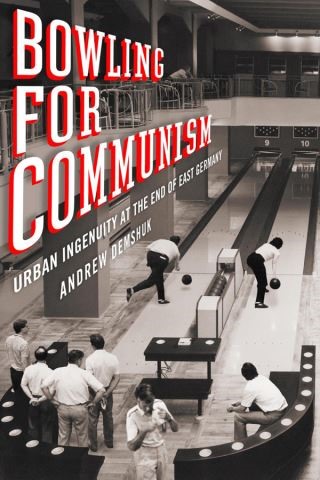 Urban Ingenuity at the End of East Germany

Bowling for Communism illuminates how civic life functioned in Leipzig, East Germany's second-largest city, on the eve of the 1989 revolution by exploring acts of "urban ingenuity" amid catastrophic urban decay. Andrew Demshuk profiles the creative activism of local communist officials who, with the help of scores of volunteers, constructed a palatial bowling alley without Berlin's knowledge or approval. In a city mired in disrepair, civic pride overcame resentment against a regime loathed for corruption, Stasi spies, and the Berlin Wall.

Reconstructing such episodes through interviews and obscure archival materials, Demshuk shows how the public sphere functioned in Leipzig before the fall of communism. Hardly detached or inept, local officials worked around centralized failings to build a more humane city. And hardly disengaged, residents turned to black-market construction to patch up their surroundings.

Because such "urban ingenuity" was premised on weakness in the centralized regime, the dystopian cityscape evolved from being merely a quotidian grievance to the backdrop for revolution. If, by their actions, officials were demonstrating that the regime was irrelevant, and if, in their own experiences, locals only attained basic repairs outside official channels, why should anyone have mourned the system when it was overthrown?

Andrew Demshuk is Associate Professor of History at American University. He is author of Demolition on Karl Marx Square and The Lost German East.