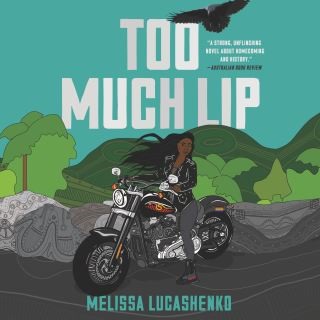 A gritty and darkly hilarious novel quaking with life—winner of Australia’s Miles Franklin Award—that follows a queer, First Nations Australian woman as she returns home to face her family and protect the land of their ancestors.

Wise-cracking Kerry Salter has spent her adulthood avoiding two things: her hometown and prison. A tough, generous, reckless woman accused of having too much lip, Kerry uses anger to fight the avalanche of bullshit the world spews. But now her Pop is dying and she's an inch away from the lockup, so she heads south on a stolen Harley for one last visit.

Kerry plans to spend twenty-four hours, tops, across the border. She quickly discovers, though, that Bundjalung country has a funny way of latching on to people—not to mention her chaotic family and the threat of a proposal to develop a prison on Granny Ava’s Island, the family’s spiritual home. On top of that, love may have found Kerry again when a good-looking white fella appears out of nowhere with eyes only for her.

As the fight mounts to stop the development, old wounds open. Surrounded by the ghosts of their Elders and the memories of their ancestors, the Salters are driven by the deep need to make peace with their past while scrabbling to make sense of their present. Kerry just hopes they can come together in time to preserve Granny Ava’s legacy and save their ancestral land.

Melissa Lucashenko is a Goorie author of Bundjalung and European heritage. Her first novel, Steam Pigs, was published in 1997 and since then her work has received acclaim in many literary awards. Too Much Lip is her sixth novel and won the 2019 Miles Franklin Literary Award and the Queensland Premier’s Award for a Work of State Significance. It was also shortlisted for the Prime Minister’s Literary Award for Fiction, the Stella Prize, two Victorian Premier’s Literary Awards, two Queensland Literary Awards and two NSW Premier’s Literary Awards. Melissa is a Walkley Award winner for her non-fiction, and a founding member of human rights organization Sisters Inside. She writes about ordinary Australians and the extraordinary lives they lead.