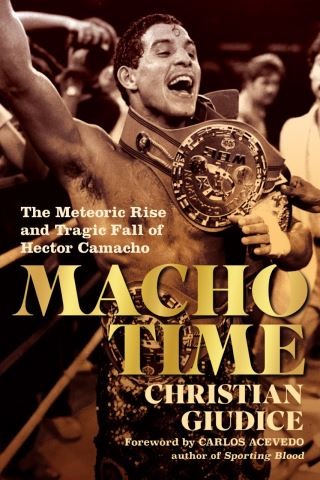 The Meteoric Rise and Tragic Fall of Hector Camacho

“In yet another skillful excavation of a dazzling Latino champion, Christian Giudice...follows Hector ‘Macho’ Camacho from his embattled childhood in Spanish Harlem, to the heights of his electrifying yet too-brief stardom and onto his abject end by hail of gunfire in a carful of cocaine. It is a compelling journey.”—Mark Kram Jr., author of Smokin’ Joe: The Life of Joe Frazier

Hector Camacho lived fast, and his fists flew even faster in the ring. Handsome, flamboyant, and outspoken, Camacho electrified the boxing scene of the 1980s and, shouting his mantra “Macho Time”, he beat some of the greatest fighters of his generation.

But his high-speed life caught up with him eventually―and tragically―when he was shot dead outside a nightclub in Puerto Rico at the age of fifty. Macho Time is written by Christian Giudice, author of Hands of Stone, the definitive biography of Roberto Duran, which was made into the motion picture of the same name starring Robert De Niro.

Macho Time is the first biography of Hector Camacho Sr. Camacho's son, Hector Camacho Jr., also a professional boxer, worked closely with author Christian Giudice to give him unprecedented access and insight into this complex man.

I thought I was cocky. Camacho surpasses me by three or four levels. But when Camacho brags, he’s not trying to convince you of anything; he’s just telling you what’s going to happen.”—Sugar Ray Leonard, from the pages of Macho Time

“He would give me a hug and a kiss, then he would sit on the couch and make everyone laugh so hard. He had such good energy and spirit. He brought such joy to people whenever he entered a room. It was a gift.”—Hector Camacho Jr., from Afterword of Macho Time

Christian Giudice: Christian Giudice was born in Haddonfield, NJ. He currently lives in Charlotte, NC and teaches English at Harper Middle College High School. A Villanova graduate, Christian has written Hands of Stone: The Life and Legend of Roberto Duran, whose subject was the focus of a motion picture, Beloved Warrior: The Rise and Fall of Alexis Arguello and A Fire Burns Within: The Miraculous Journey of Wilfredo Gomez. Christian is also the author of the forthcoming book Macho Time: The Meteoric Rise and Tragic Fall of Hector Camacho (Hamilcar Publications 2020).