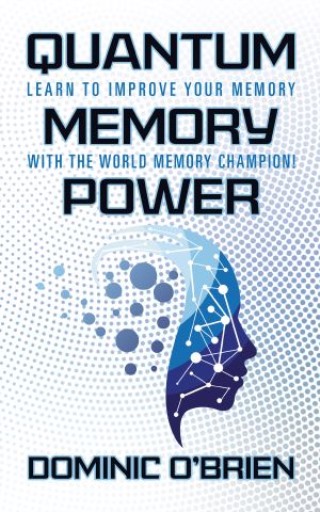 Learn to Improve Your Memory With the World Memory Champion!

UNLEASH YOUR MEMORY POWER!
Dominic O'Brien is the record breaking 8-time World Memory Champion and the current Senior World Champion. In the record books for memorizing 54 decks of playing cards after a single sighting of each card, Dominic can easily memorize a sequence of 2000 numbers in less than an hour. Still appearing regularly on television this champion is willing to share with you his ultimate tools for developing the perfect memory. Let him teach you how to harness and unleash your memory power so you will have unlimited capacity and be able to remember names, faces, numbers, birthdays, dates, appointments, speeches, or any sequence of numbers you want.
>Quantum Memory Power provides practical applications and exercises to test and strengthen your abilities. By engaging your imagination and creative powers you will gain speed, accuracy and poise in the development of your own quantum memory powers.
You will learn:

The techniques, systems and strategies in Quantum Memory Power are unrivaled. Dominic has devised each and every one of them from his own trials and errors. The result is a powerful system that will unleash memory powers you never knew you had. Come, join him and take the journey of a lifetime.

Dominic O'Brien: A bestselling author of You Can Have An Amazing Memory and How to Develop a Brilliant Memory Week by Week, he has won the World Memory Championship eight times.