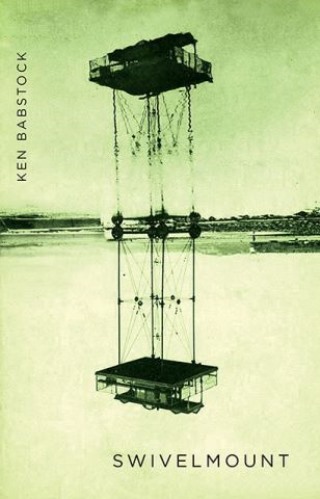 Poems to read in the small hours before dawn, when the sirens start up again.

Swivelmount’s concerns – the collapse of subject and world, eros and law, knowledge and bafflement – gain new urgency as Babstock fiercely reimagines and reassembles the remnants into a viable order. At the core of their kinetic imagery is a freefall into mourning, but also a faith in others: a Babstock poem is the voice next to you in the ER waiting room, becalmed, compassionate, darkly humorous. This is Babstock at his best.

“This is a poetry that is so uncompromising in how it deals with traditions – of poetic forms, of dictions, of militaristic histories – that it becomes something magnificent: brittle and hard. It will change how you think.” —Juliana Spahr for On Malice

“On Malice is a fascinating and elegiac rebuke to surveillance technologies and its discontents. Ken Babstock is a wonderful and spirited poet. His work is full of musicality, syncopation, wit, and formal acuity.” —Peter Gizzi

“The flavour of this poetry is complex – it will have to be consumed in small amounts like a sipping tequila. It inebriates quickly. It imparts a convivial brilliance to life. And it is not without its sinister edge.” —Ange Mlinko for Methodist Hatchet

“I felt as if I were reading poems written with a scalpel. Methodist Hatchet swaggers with confidence, intelligence, technique, humour, and that pinioning accuracy of observation we’ve come to expect from Babstock, surely one of the most versatile, switched-on, and linguistically savvy poets of our time.” —Simon Armitage

“Methodist Hatchet is as precise as it is expansive, as complex as it is companionable. It refuses to look away from the unstable nature of self and world and word. That is why Babstock is one of the most exciting lyric poets writing today.” —Sina Queyras, The Globe and Mail for Methodist Hatchet

Ken Babstock: Ken Babstock won Canada’s inaugural Latner Writer’s Trust Poetry Prize in 2014 for a body of work in mid-career. His fourth collection, Methodist Hatchet (Anansi, 2011), won The Griffin Prize for Excellence in Poetry and was a finalist for The Trillium Book Award. His previous collections of poetry include, Mean (1999), winner of the Atlantic Poetry Prize and the Milton Acorn People's Poet Award, Days into Flatspin (2001), winner of a K.M. Hunter Award and finalist for the Winterset Prize, and Airstream Land Yacht (2006), finalist for The Griffin Prize for Poetry, The Governor General’s Literary Award, and The Winterset Prize, and winner of the Trillium Book Award for Poetry. His poems have won Gold at the National Magazine Awards, been widely anthologized in Canada, the UK, the US, and Ireland, most recently in The Oxford Anthology of Canadian Literature in English, and translated into Dutch, German, Serbo-Croatian, Czech, and French. All five previous titles were named Globe and Mail Top 100 Books of the Year. Recent poems have appeared in Best Canadian Poetry 2008, 2009, 2010 and 2011, and in Best of The Best Of Canadian Poetry. A book length poem, On Malice, written while in Berlin as one of DAAD’s International Artist Residents in 2011/12, was published in fall 2014 by Coach House Books to wide critical acclaim. Ken Babstock was born in Newfoundland and now lives in Toronto with his son.