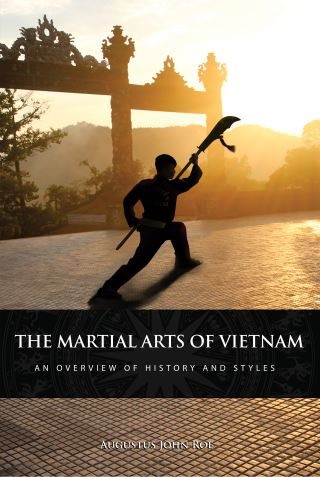 The Martial Arts of Vietnam

An Overview of History and Styles

The first English-language book to detail the combat systems and martial culture of a land shaped by centuries of conflict.

The Martial Arts of Vietnam presents an engaging overview of the evolution of Vietnamese martial arts from 2,000 BCE until today.

We will look at the mythical origins of the Vietnamese people and the impact that invasions from neighboring countries had on the martial culture of Vietnam. We will discover how kings and governments promoted and, in some cases, crushed martial traditions; alongside how Vietnams’ unusual geography both protected and exposed martial styles and lineages.

This work offers stunning photography, era timelines, and regional maps that allow for an engaging adventure through Vietnam’s northern, central, and southern regions, all in search of events and catalysts that shaped its martial history through the ages.

When we arrive at modern Vietnams’ martial arts society, we meet with many teachers from the northern, central, and southern regions who, through courageous efforts, are attempting to codify and preserve their unique combat systems for the benefit of all martial artists. We explore the ethnic minority martial arts, Sino-Vietnamese and Chinese martial arts, as well as various imported and foreign systems and how they are positioned in relation to modern Vietnam’s martial arts practices.

The Martial Arts of Vietnam lifts the veil of secrecy long surrounding this socialist state to reveal its combat systems and their thousand years of evolution.

Augustus John Roe is an author, linguist, and instructor of traditional Vietnamese martial arts. For more than a decade, he has lived and trained in Asia. During this time Augustus has worked on numerous television shows, books, magazines and academic projects documenting local cultures and martial arts practices.

Augustus has a passion for language; he writes fiction, non-fiction and works as a freelance editor. His academic achievements include a master’s degree in martial arts studies and a Cambridge delta qualification in language teaching. Alongside traditional Vietnamese martial arts, Augustus had trained in tae kwon do, wing chun, Brazilian jiu jitsu, arnis, muay thai, boxing, and white crane kung fu. He currently lives with his wife and children in Vietnam’s capital city, Hanoi.