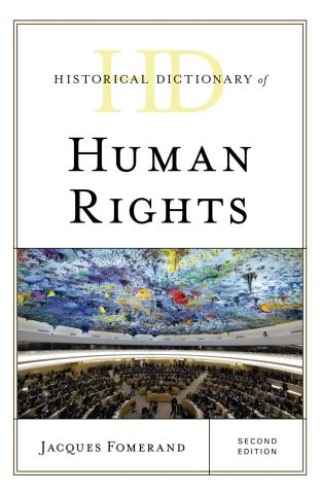 The second edition of Historical Dictionary of Human Rights explores both the theory and the practice of international human rights with a focus on the norms and institutions that make up the “architecture” of the global human rights regime and the tools, processes and procedures through which such norms are realized and “enforced.” Particular attention is given to the contextual political and sociological factors that shape and constrain the operation and functioning of international human rights institutions and their state and non-state actors.

This is done through a chronology, an introduction, and an extensive bibliography. The dictionary section has more than 1.000 cross-referenced entries on terminology, conventions, treaties, intergovernmental organizations in the United Nations, and non-governmental organizations, as well as some of the pioneers and defenders. This book is an excellent resource for students, researchers, and anyone wanting to know more about human rights.

Jacques Fomerand: Jacques Fomerand had a lengthy career with the United Nations Department of Economic Affairs. When he retired in 2003, he was director of the North-American United Nations University Office in New York. Since then he has taught in the UN Program at Occidental College, Los Angeles. He also teaches at New York University and John Jay College of Criminal Justice of the City University of New York. He has published widely on international relations, international organization, human rights, North-South relations and human security.