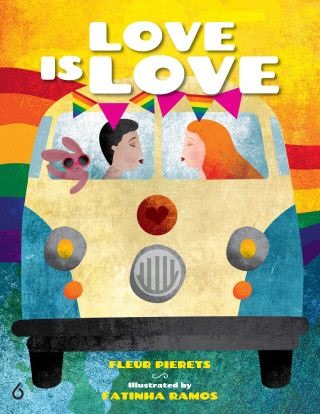 The worldwide adventure continues as Fleur and Julian celebrate marriage in 15 more countries that allow same-sex unions, completing the journey they started in Love Around the World (2020 Rainbow Book List).

Fleur Pierets and Julian P. Boom are two women in love. They live together, eat together, sleep together, and work together. When Fleur asks Julian to marry her, Julian says “Yes!” But in most countries, a man cannot marry a man and a woman cannot marry a woman. There are 195 countries in the world, but they can only get married in 28 of them. They think this is unfair! So they decide to get married in all 28 countries that allow same-sex marriage.

Inspired by a true story, Love Around the World, was the first in this two-volume children’s book series about Julian and Fleur’s adventures. In Love Is Love: The Journey Continues, they pick up where they left off, exploring the marriage traditions of fourteen countries: Argentina, Austria, Colombia, Denmark, Ecuador, Germany, Luxembourg, Malta, New Zealand, Norway, South Africa, Sweden, Taiwan, and the United Kingdom.

Fleur Pierets: Fleur Pierets is an artist, writer, and speaker who focuses on gay identity and positive activism. She is the author of the 2019 book Julian, which was a best-seller in the Netherlands and in her native Belgium, and Love Around the World, the first of a two-volume children's book series on marriage equality around the world. Together with her late wife, Julian P. Boom, she founded Et Alors? magazine. It features conversations with queer musicians, visual artists, writers and performers by whom they are inspired, capturing a world striving for change and awareness of gay imagery and female representation in art history. In 2017, Fleur and Julian started 22–The Project, a performance art piece in which the couple would marry in every country that legalized same-sex marriage. There were 22 countries when they launched the project in 2017; since then, the number of countries has grown to 27. After wedding #4, in France, Julian was diagnosed with brain cancer. She died shortly thereafter. With this book series, Fleur is seeing their project through to the end. Fleur Pierets lives in Antwerp, Belgium.