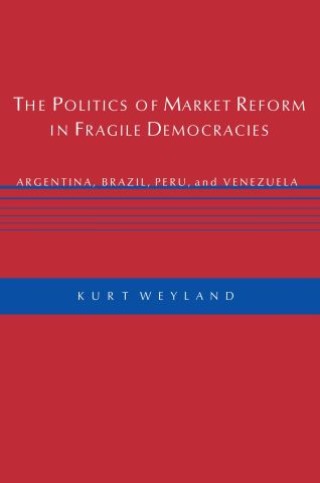 The Politics of Market Reform in Fragile Democracies

This book takes a powerful new approach to a question central to comparative politics and economics: Why do some leaders of fragile democracies attain political success--culminating in reelection victories--when pursuing drastic, painful economic reforms while others see their political careers implode? Kurt Weyland examines, in particular, the surprising willingness of presidents in four Latin American countries to enact daring reforms and the unexpected resultant popular support. He argues that only with the robust cognitive-psychological insights of prospect theory can one fully account for the twists and turns of politics and economic policy in Argentina, Brazil, Peru, and Venezuela during the 1980s and 1990s.


Assessing conventional approaches such as rational choice, Weyland concludes that prospect theory is vital to any systematic attempt to understand the politics of market reform. Under this theory, if actors perceive themselves to be in a losing situation they are inclined toward risks; if they see a winning situation around them, they prefer caution.


In Latin America, Weyland finds, where the public faced an open crisis it backed draconian reforms. And where such reforms yielded an apparent economic recovery, many citizens and their leaders perceived prospects of gains. Successful leaders thus won reelection and the new market model achieved political sustainability. Weyland concludes this accessible book by considering when his novel approach can be used to study crises generally and how it might be applied to a wider range of cases from Latin America, Africa, and Eastern Europe.

Kurt Weyland: Kurt Weyland is Associate Professor of Government at the University of Texas at Austin. He is the author of Democracy without Equity: Failures of Reform in Brazil.