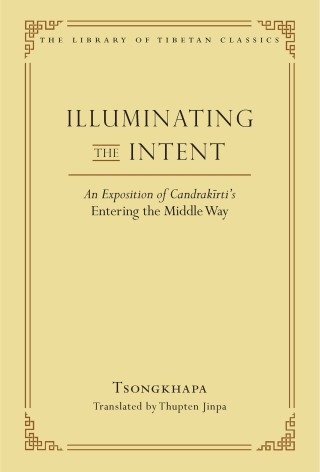 An Exposition of Candrakirti's Entering the Middle Way

The Dalai Lama’s translator and author of the definitive biography of Tsongkhapa here presents the first translation of one of that master’s seminal and best-known works.

This work is perhaps the most influential explanation of Candrakirti’s seventh-century classic Entering the Middle Way (Madhyamakavatara). Written as a supplement to Nagarjuna’s Fundamental Verses on the Middle Way, Candrakirti’s text integrates the central insight of Nagarjuna’s thought—the rejection of any metaphysical notion of intrinsic existence—with the well-known Mahayana framework of the ten levels of the bodhisattva, and it became the most studied presentation of Madhyamaka thought in Tibet.

Completed the year before the author’s death, Tsongkhapa’s exposition of Candrakirti’s text is recognized by the Tibetan tradition as the final standpoint of Tsongkhapa on many philosophical questions, particularly the clear distinctions it draws between the standpoints of the Madhyamaka and Cittamatra schools. Written in exemplary Tibetan, Tsongkhapa’s work presents a wonderful marriage of rigorous Madhyamaka philosophical analysis with a detailed and subtle account of the progressively advancing mental states and spiritual maturity realized by sincere Madhyamaka practitioners. The work remains the principal textbook for the study of Indian Madhyamaka philosophy in many Tibetan monastic colleges, and it is a principal source for many Tibetan teachers seeking to convey the intricacies of Madhyamaka philosophy to non-Tibetan audiences.

Though it is often cited and well known, this is the first full translation of this key work in a Western language.

Thupten Jinpa: Thupten Jinpa was educated in the classical Tibetan monastic academia and received the highest academic degree of geshe lharam (equivalent to a doctorate in divinity). Jinpa also holds a BA in philosophy and a PhD in religious studies, both from the University of Cambridge, England. Since 1985 he has been the principal translator to the Dalai Lama, accompanying him to the United States, Canada, and Europe. He has translated and edited many books by the Dalai Lama, including The World of Tibetan Buddhism, Essence of the Heart Sutra, and the New York Times bestseller Ethics for the New Millennium.

Jinpa has published scholarly articles on various aspects of Tibetan culture, Buddhism, and philosophy, and books such as Songs of Spiritual Experience (co-authored) and Self, Reality and Reason in Tibetan Philosophy. He serves on the advisory board of numerous educational and cultural organizations in North America, Europe, and India. He is currently the president and the general series editor of the Institute of Tibetan Classics, a nonprofit educational organization dedicated to translating key Tibetan classics into contemporary languages. And he also currently chairs the Mind & Life Institute and Compassion Institute.