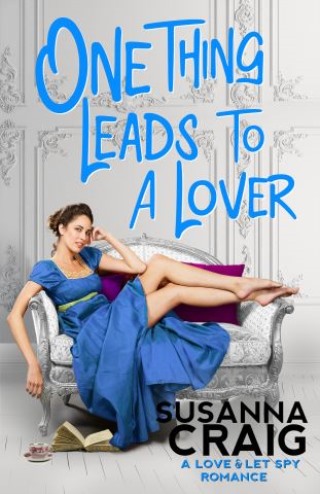 One Thing Leads to a Lover

Amanda Bartlett, widowed Countess of Kingston, is a woman beyond reproach. Married at nineteen, she dutifully provided the Earl with an heir and a spare before his death three years ago. Since then, Amanda has lived a simple, quiet life. A life that, if she were honest, has become more than a trifle dull. So when an adventure literally drops into her lap, in the shape of a mysterious book, she intends to make the most of it—especially if it brings her closer to a charismatic stranger. . . .

Major Langley Stanhope, an intelligence officer and master mimic known as the Magpie, needs to retrieve the code book that has fallen into Amanda’s hands. The mistaken delivery has put them both in grave danger and in a desperate race to unearth a traitor. It’s also stirred an intense, reckless attraction. Langley believes the life he leads is not suitable for a delicate widow, but it seems he may have underestimated the lady’s daring . . . and the depths of their mutual desire. . . .

PRAISE FOR WHO’S THAT EARL

Susanna Craig: Almost as soon as she could hold a pencil, Susanna Craig began writing stories. Today, she pens award-winning Regency-era romance novels that blend history and heart with a dash of heat. An English professor, wife, and mom, she’s currently finding her happily ever after in Kentucky while holding onto her Midwestern roots. Find her online at www.susannacraig.com.