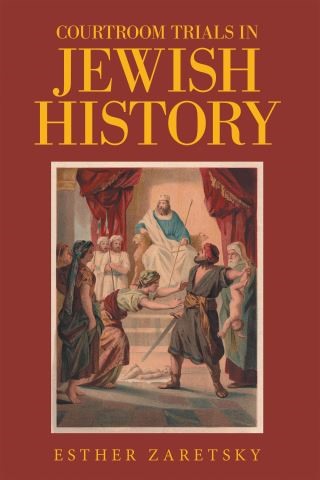 These trials teach us how the Jewish people struggled through the ages to resolve their controversies while faithfully embracing their moral compass of justice and equality. From the treason trial of Capt. Alfred Dreyfus, we learn how France separated church from state in politics and how Zionism influenced the creation of the modern state of Israel. From the trial of Leo Frank, we learn how his lynching inspired the creation of the Anti-Defamation League. The aftermath of the alleged trial of Jesus of Nazareth inspired a new religion that has flourished around the globe. The verdicts from these trials formed policies and shaped societies for generations to follow.

Esther Zaretsky: Esther Zaretsky practices law in West Palm Beach, Florida, with her husband, Richard Zaretsky. She has tried hundreds of civil and criminal trials over her forty-five years working as an attorney, and won multimillion dollar verdicts for her personal injury clients. She was a founding board member of the Midrasha High School of the Palm Beach Commission for Jewish Education and taught Jewish law courses at the school for many years. She has three children, and six grandchildren. Her daughter, Dr. Sophia Zaretsky, practices psychiatry in West Palm Beach, where she lives with her two sons, Alex and Liev. Her son Max Zaretsky is a civil trial attorney, married to Johanna Kandel, also residing in West Palm Beach with their daughter Annabelle; and her son Zev Zaretsky is a banker/investment analyst, married to Brittany Zaretsky, residing in Jupiter with their three children, Matthew, Hannah, and Sadie.