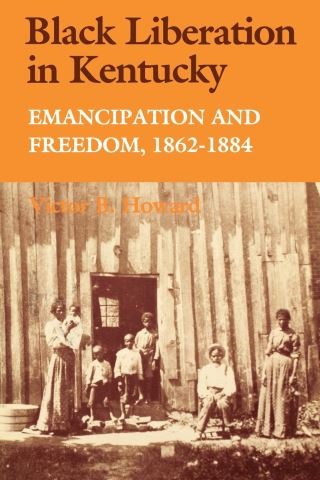 Kentucky occupied an unusual position with regard to slavery during the Civil War as well as after. Since the state never seceded, the emancipation proclamation did not free the majority of Kentucky's slaves; in fact, Kentucky and Delaware were the only two states where legal slavery still existed when the thirteenth amendment was adopted by Congress. Despite its unique position, no historian before has attempted to tell the experience of blacks in the Commonwealth during the Civil War and Reconstruction.

Victor B. Howard's Black Liberation in Kentucky fills this void in the history of slavery and emancipation. In doing so, however, he does not just chronicle the experiences of black Kentucky, because as he notes in his introduction, "such a work would distort the past as much as a book concerned solely with white people." Beginning with an overview of the situation before the war, Howard examines reactions to the emancipation proclamation and how the writ was executed in Kentucky. He also explores the role the army played, both during the war as freed black enlisted and after the war as former slaves transitioned to freedom.

The situation for former slaves in Kentucky was just as precarious as in other southern states, and Howard documents the challenges they faced from keeping families together to finding work. He also documents the early fights for civil rights in the state, detailing battles over the right to testify in court, black suffrage, and access to education. As Black Liberation in Kentucky shows, Kentucky's slaves fought for their freedom and rights from the beginning, refusing to continue in bondage and proving themselves accomplished actors destined to play a critical role in Civil War and Reconstruction.

Victor B. Howard: Victor B. Howard was professor of history of Morehead State University and author of Religion and the Radical Republican Movement, 1860-1870, Conscience and Slavery, and The Evangelical War Against Slavery and Caste: The Life and Times of John G. Fee.