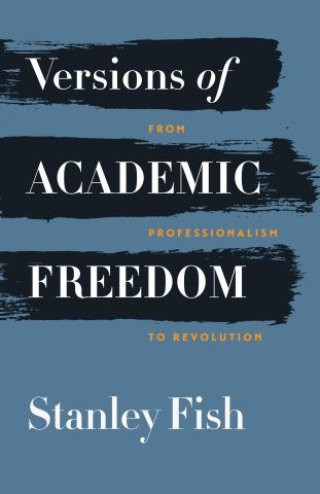 From Professionalism to Revolution

Through his columns in the New York Times and his numerous best-selling books, Stanley Fish has established himself as our foremost public analyst of the fraught intersection of academia and politics. Here Fish for the first time turns his full attention to one of the core concepts of the contemporary academy: academic freedom.

Depending on who’s talking, academic freedom is an essential bulwark of democracy, an absurd fig leaf disguising liberal agendas, or, most often, some in-between muddle that both exaggerates its own importance and misunderstands its actual value to scholarship. Fish enters the fray with his typical clear-eyed, no-nonsense analysis. The crucial question, he says, is located in the phrase “academic freedom” itself: Do you emphasize “academic” or “freedom”? The former, he shows, suggests a limited, professional freedom, while the conception of freedom implied by the latter could expand almost infinitely. Guided by that distinction, Fish analyzes various arguments for the value of academic freedom: Is academic freedom a contribution to society's common good? Does it authorize professors to critique the status quo, both inside and outside the university? Does it license and even require the overturning of all received ideas and policies? Is it an engine of revolution? Are academics inherently different from other professionals? Or is academia just a job, and academic freedom merely a tool for doing that job?

No reader of Fish will be surprised by the deftness with which he dismantles weak arguments, corrects misconceptions, and clarifies muddy arguments. And while his conclusion—that academic freedom is simply a tool, an essential one, for doing a job—may surprise, it is unquestionably bracing. Stripping away the mystifications that obscure academic freedom allows its beneficiaries to concentrate on what they should be doing: following their intellectual interests and furthering scholarship.

Stanley Fish:
Stanley Fish is the Davidson-Kahn Distinguished University Professor of Law and the Humanities in the College of Law at Florida International University and the author of numerous books.