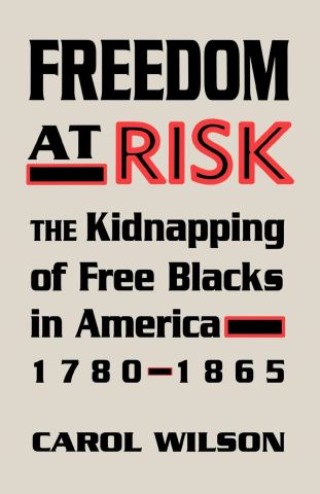 Kidnapping was perhaps the greatest fear of free blacks in pre-Civil War America. Though they may have descended from generations of free-born people or worked to purchase their freedom, free blacks were not able to enjoy the privileges and opportunities of white Americans. They lived with the constant threat of kidnapping and enslavement, against which they had little recourse.

Most kidnapped free blacks were forcibly abducted, but other methods, such as luring victims with job offers or falsely claiming free people as fugitive slaves, were used as well. Kidnapping of blacks was actually facilitated by numerous state laws, as well as the federal fugitive slave laws of 1793 and 1850. Greed motivated kidnappers, who were assured high profits on the sale of their victims. As the internal slave trade increased in the early nineteenth century, so did kidnapping.

If greed provided the motivation for the crime, racism helped it to continue unabated. Victims usually found it extremely difficult to regain their freedom through a legal system that reflected society's racist views, perpetuated a racial double standard, and considered all blacks slaves until proven otherwise. Fortunate was the victim who received assistance, sometimes from government officials, most often from abolitionists. Frequently, however, the black community was forced to protect its own and organized to do so, sometimes by working within the law, sometimes by meeting violence with violence.

Carol Wilson: Carol Wilson is Arthur A. and Elizabeth R. Knapp Professor of American History at Washington College. She is the author of The Two Lives of Sally Miller: A Case of Mistaken Racial Identity in Antebellum New Orleans.