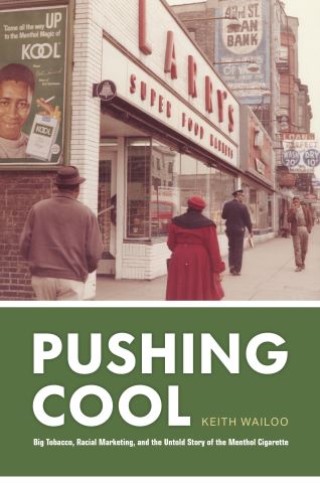 Big Tobacco, Racial Marketing, and the Untold Story of the Menthol Cigarette

Spanning a century, Pushing Cool reveals how the twin deceptions of health and Black affinity for menthol were crafted—and how the industry’s disturbingly powerful narrative has endured to this day.

Police put Eric Garner in a fatal chokehold for selling cigarettes on a New York City street corner. George Floyd was killed by police outside a store in Minneapolis known as “the best place to buy menthols.” Black smokers overwhelmingly prefer menthol brands such as Kool, Salem, and Newport. All of this is no coincidence. The disproportionate Black deaths and cries of “I can’t breathe” that ring out in our era—because of police violence, COVID-19, or menthol smoking—are intimately connected to a post-1960s history of race and exploitation.

In Pushing Cool, Keith Wailoo tells the intricate and poignant story of menthol cigarettes for the first time. He pulls back the curtain to reveal the hidden persuaders who shaped menthol buying habits and racial markets across America: the world of tobacco marketers, consultants, psychologists, and social scientists, as well as Black lawmakers and civic groups including the NAACP. Today most Black smokers buy menthols, and calls to prohibit their circulation hinge on a history of the industry’s targeted racial marketing. In 2009, when Congress banned flavored cigarettes as criminal enticements to encourage youth smoking, menthol cigarettes were also slated to be banned. Through a detailed study of internal tobacco industry documents, Wailoo exposes why they weren’t and how they remain so popular with Black smokers.

Keith Wailoo: Keith Wailoo is the Henry Putnam University Professor of History and Public Affairs at Princeton University. His books include Dying in the City of the Blues, How Cancer Crossed the Color Line, and Pain: A Political History. Along with Dr. Anthony Fauci and others, he won the 2021 Dan David Prize.