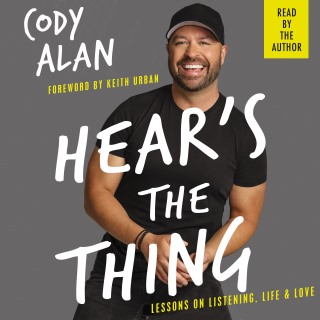 Lessons on Listening, Life, and Love

Read by the author.

In our noise-filled world, where everyone is so quick to speak, the fine art of listening is often lost. When we slow down and give someone our full attention, we offer them a safe place to be fully heard and accepted.

Hear’s the Thing is a story about what is possible when someone is brave enough to listen to others… and, ultimately, themselves without judgement.

For Cody Alan, one of country music’s most famous on-air radio and TV personalities, listening to other people has always been a crucial part of his role. It was by fostering his ability to hear others that he discovered the person he most needed to listen to was himself. Listening ultimately led him on a journey of self-discovery where he found the courage to come out as gay, the openness to question spiritually, and the strength to explore a new definition of parenting and family.

In his debut memoir, Hear’s the Thing, Cody shares some of the many lessons he’s learned along the way, including:

Cody’s story will inspire you to hear that inner voice that is leading you to a deeper connection with yourself and the people around you.

The man Keith Urban says "makes Ryan Seacrest look like a slacker," Cody Alan is as beloved by the Nashville stars he covers as he is by millions of country fans. As host and executive producer of CMT Radio, listeners hear Cody daily on more than 200 radio stations. On CMT’s flagship music show, Hot 20 Countdown, his face can also be seen in 90 million homes, making him “Country’s Renaissance Man” (Radio Ink), and the ultimate host and insider.

Cody’s listeners and viewers tune in from all over the world because he is, hands down, one of the greatest celebrity interviewers on radio and television today, and his heartfelt enthusiasm for the music resonates through every platform. He is at ease with "all kinds of kinds," having interviewed everyone from Taylor Swift to Blake Shelton, and Bradley Cooper to Dolly Parton. Whether on radio, TV, digital or social media, he delivers the same dynamic, curious, engaging personality that keeps fans connected.