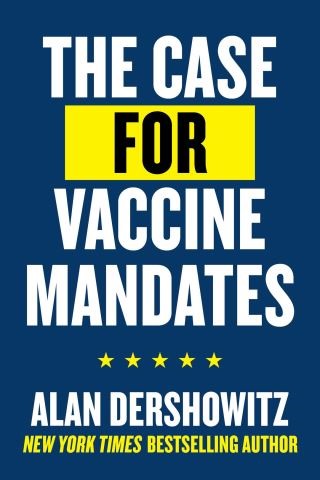 The Case for Vaccine Mandates

In The Case for Vaccine Mandates, Alan Dershowitz—New York Times bestselling author and one of America’s most respected legal scholars—makes an argument, against the backdrop of ideologically driven and politicized objections, for mandating (with medical exceptions) vaccinations as a last resort, if proved necessary to prevent the spread of COVID.

Alan Dershowitz has been called “one of the most prominent and consistent defenders of civil liberties in America” by Politico and “the nation’s most peripatetic civil liberties lawyer and one of its most distinguished defenders of individual rights” by Newsweek. He is also a fair-minded and even-handed expert on civil liberties and constitutional rights, and in this book offers his knowledge and insight to help readers understand how mandated vaccination and compulsion to wearing masks should and would be upheld in the courts.

The Case for Vaccine Mandates offers a straightforward analytical perspective: If a vaccine significantly reduces the threat of spreading a serious and potentially deadly disease without significant risks to those taking the vaccine, the case for governmental compulsion grows stronger. If a vaccine only reduces the risk and seriousness of COVID to the vaccinated person but does little to prevent the spread or seriousness to others, the case is weaker. Dershowitz addresses these and the issue of masking through a libertarian approach derived from John Stuart Mill, the English philosopher and political economist whose doctrine he summarizes as, “your right to swing your fist ends at the tip of my nose.” Dershowitz further explores the subject of mandates by looking to what he describes as the only Supreme Court decision that is directly on point to this issue; decided in 1905, Jacobson v. Massachusetts involved a Cambridge ordinance mandating vaccination against smallpox and a fine for anyone who refused.

In the end, The Case for Vaccine Mandates represents an icon in American law and due process reckoning with what unfortunately has become a reflection of our dangerously divisive age, where even a pandemic and the responses to it, divide us along partisan and ideological lines. It is essential reading for anyone interested in a non-partisan, civil liberties, and constitutional analysis.

Alan Dershowitz: Alan Dershowitz is one of the most celebrated lawyers in the world. He was the youngest full professor in Harvard Law School history, where he is now the Felix Frankfurter Professor of Law, Emeritus. The author of numerous bestselling books, from Chutzpah to Guilt by Accusation to The Case Against Impeaching Trump to The Best Defense to Reversal of Fortune (which was made into an Academy Award–winning film) to Defending Israel, Dershowitz has advised presidents and prime ministers and has represented many prominent men and women, half of them pro bono.