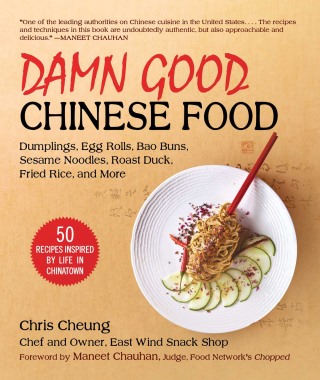 From acclaimed chef Chris Cheung comes a cookbook inspired by growing up in New York's Chinatown—with a foreword by Maneet Chauhan, celebrity chef, author, and judge on The Food Network's Chopped

There is a particular region in today's renaissance of Chinese cooking that is often overlooked: the food of Chinatown.

Like many of his predecessors, chef Chris Cheung was inspired by the place where he grew up, lived, worked, and ate. From take-out orders at tiny hole-in-the wall teahouses to the lush green vegetables piled high at the markets, celebration dinners at colossal banquet halls to authentic home-cooked meals, Chinatown’s culinary treasures and culture laid the groundwork for his career as a chef and serve as the creative force behind this book.

Through personal insights, stories, and recipes, the author walks you through the markets, restaurants, and streets, providing a stunning portrait of this important cuisine and its countless contributions to American culture.

Chris Cheung: Chris Cheung is a New York native and grew up in the heart of Chinatown. He was brought up around great Cantonese food, where he undoubtedly picked up his affinity for Chinese cuisine. Right out of school he started working for world-famous chefs like Jean-Georges Vongerichten, Nobu Matsuhisa, and Masaharu Morimoto. Later, he became part of the opening kitchen staff at Jean-Georges, cooking alongside Wylie Dufresne and Didier Virot. Chef Cheung also had the privilege being Anthony Bourdain's guide to New York's Chinatowns on the hit show No Reservations and has served as a guest judge on The Food Network's Chopped and Beat Bobby Flay. His inspiration for Chinese cooking took him to Shanghai where he prepared banquets in the country side farming and fishing villages. There he learned the nuances of Shanghai cuisine and was blown away by its farm-to-table and sea-to-table style of cooking. Currently, he is the chef and owner of acclaimed restaurant East Wind Snack Shop, which has two locations in Brooklyn.

Maneet Chauhan is a celebrity chef, author, and judge on the Food Network's hit show Chopped, and won the James Beard Award of Excellence winner. She has received glowing accolades from a vast array of media for her globally-inspired culinary acumen. The only Indian female to ever compete on Iron Chef and lauded by Bon Appétit, USA Today, Time, Esquire, Travel & Leisure, Gourmet, Town & Country, Business Week, and O Magazine, as well as garnering a stunning three-star review from the Chicago Tribune, Chef Chauhan is a celebrated chef who is an inspiration to many, and a force to be reckoned with. She authored the book Flavors of Our World in 2013 and her forthcoming book Chaat: The Best Recipes From the Kitchens, Markets, and Railways of India published in October 2020.