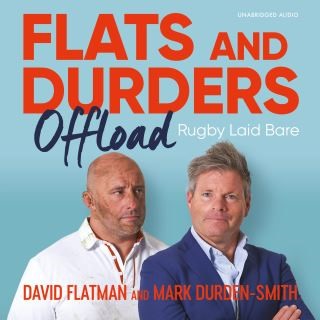 Once described as rugby’s answer to Ant & Dec, David Flatman and Mark Durden-Smith are the oddest of odd couples. Now this hugely popular rugby broadcasting double act have turned to dissecting and celebrating rugby union in book form. And, as you’d expect, it’s a brilliant combination of in-depth knowledge and hilarious stories.

Familiar to millions of fans through their television work, they provide fascinating and entertaining insight into the sport they love. They revealthe hardest players, the greatest characters and the intimate secrets of the front row. They address key issues facing the sport, such as injury, retirement and the future of the game. Nothing is off limits and no quarter is given – to anyone.

With insightful analysis, unforgettable stories and the occasional food reference, Flats and Durders Offload is an unmissable read for all rugby fans.

David Flatman:
David Flatman played rugby as a prop forward for Saracens and Bath between 1998 and 2012, making more than 250 club appearances and also winning eight caps for England. After retiring from the game, he moved into a career in broadcasting, working for Channel Five, ITV, BT Sport and Amazon Prime. This is his first book.
|||
Mark Durden-Smith was born in central London in 1968 and has had a long career in television, working for ITV, Channel Four and Sky; he now presents Premiership Rugby on Channel Five. This is his first book.