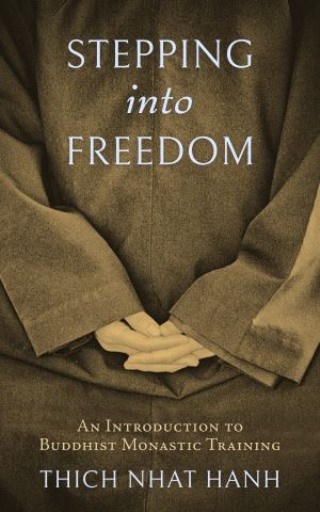 An Introduction to Buddhist Monastic Training

Here are practice poems, novice precepts, and "Mindful Manners" on how to be a Buddhist monk and nun in the Plum Village tradition. With inspiration for every step in the monastic timetable from "Waking Up" and "Taking the First Steps of the Day" to "Lighting a Candle" in the evening, this book was originally compiled for novices who are still learning how to practice mindfulness in daily life. Thus it is perfect for beginners in mindfulness who wish to make progress in their practice at home, for young people considering a life in a spiritual community, and especially for followers of Thich Nhat Hanh who wish to deepen their understanding of the monastic way of life today.

Thich Nhat Hanh: THICH NHAT HANH is one of the most revered and influential spiritual teachers in the world today. Born in Vietnam in 1926, he became a Zen Buddhist monk at the age of sixteen. Over seven decades of teaching, he has published more than 100 books, which have sold more than five million copies in the United States alone. Exiled from Vietnam in 1966 for promoting peace, his teachings on Buddhism as a path to social and political transformation are responsible for bringing mindfulness to the West. In 1982 he established the international Plum Village Community of Engaged Buddhism in France, now the largest Buddhist monastery in Europe. He lives in Hue in Central Vietnam.