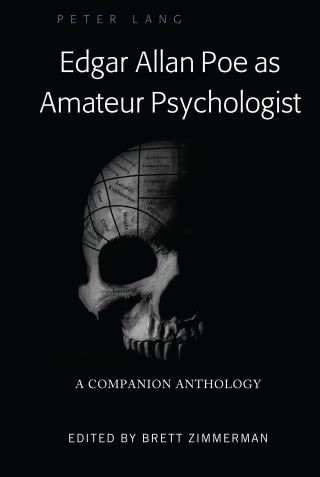 Locating Poe firmly within his Zeitgeist vis-à-vis the science and pseudoscience of the early nineteenth century, Edgar Allan Poe as Amateur Psychologist: A Companion Anthology simultaneously looks back from the 1830s and 1840s (when his literary career was at its height) to eighteenth-century theories and sources of information on mental illness, as well as forward to our own time to demonstrate how Poe’s dramatizations of psychological diseases occasionally anticipate modern nosological classifications and twenty-first-century forensic research. This interdisciplinary collection is a companion to its predecessor, Zimmerman’s Edgar Allan Poe: Amateur Psychologist (Peter Lang, 2019); it gathers the most important essays by authors—Hungerford, Stauffer, Stern, Bynum, Cleman, Hester and Segir, Phillips, Shackelford, Scheckel, Lloyd-Smith, Whipple, Butler, Uba, Walker, Zimmerman—who employ historicist and history-of-ideas methodologies. Topics include Poe’s use of and eventual disillusionment with phrenology; his attitude toward the controversial "moral treatment" of the insane as well as the "insanity defense" and its connection with the new theory of "moral insanity"; the possible sources of his knowledge of theories of mind, psychopathology and related therapies; his evolution as an amateur psychologist; the connection between physiological sickness and mental distress (the psychosomatic); and the ways in which the psychological profiles of his homicidal characters look forward to modern serial killers. This companion anthology represents a significant addition to Poe scholarship and will be of interest not only to Poe specialists but also to students, teachers, and any intelligent reader interested in the history of ideas and the intersection between literature and "mental philosophy."