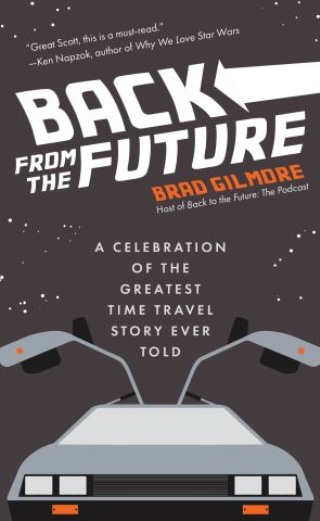 Back From the Future

A Fan’s Look at the Back to the Future Franchise

“Brad Gilmore's book not only offers new perspectives and a deeper understanding of Back to the Future, it reminds us why we fell in love with it in the first place." ─Mark Ellis, Comedian & Movie Critic

There’s a host of information out there on the Back to the Future trilogy, but never before has there been a book like this.

The history of the films, cartoons, toys, and more. The Back to the Future series is a timeless collection greatly revered by all audiences. The beauty of this book by Brad Gilmore is that it doesn’t present the history of the film as textbook information. He discusses these films from a place of passion and so effectively reveals how the history behind the movies is just as engaging as the films themselves.

Unheard details and trivia.  Gilmore, a radio and television host and host of Back to the Future: The Podcast, is an expert on all things Back to the Future. Pairing his knowledge with his passion for the films, Gilmore uses this book to discuss details and movie trivia that reveal just why the trilogy has stood the test of time. As a fan speaking to fellow fans, he dives into fan theories and provides answers to many questions readers have—because they are the very questions he himself has asked.

Check out this must-have book and learn things you never knew:

Brad Gilmore is a radio and television host born and raised in Houston, TX. Since 2011, he has been the host of The Brad Gilmore Show which covers the worlds of sports, music and pop culture. Brad currently hosts “The Hall of Fame” with WWE Hall of Famer, Booker T on ESPN Radio. Brad began his career covering music and worked as a regular contributor to Houston Press and the hip hop blog DayandaDream.com. Brad hosts a variety of TV shows and podcasts including Reality of Wrestling, Movie Trivia Schmoedown, Schmoedown Rundown, Heated Conversations (featured in the iTunes Top 10 Podcast Chart), and since 2015, Back to the Future: The Podcast which just recently surpassed 1,000,000 streams over 50 episodes. During his career, Brad Gilmore has appeared in print, radio, television and film and always looks to bring his one of a kind view to each of his endeavors and entertain audiences worldwide.